Sioux Honey Association
They didn’t become natural – they always were! 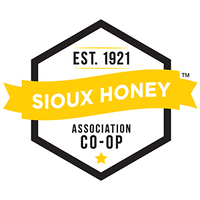 Sioux Honey also has QAI-certified organic honey available. The honey is sourced from Brazil which produces some of the highest-quality honey in the world. This is in large part due to its massive floral source, which contains flowers of various colors and flavors. Plus, Brazil has large tracts of land without modern agriculture and other disqualifying land uses, making it certifiable in the organic arena.

Almost 100 years ago Sioux Honey Association started with 5 beekeepers in Sioux City, Iowa, and now the CO-OP has grown to over 250 beekeepers throughout North America. Honey is the livelihood of the CO-OP members and they can’t afford to put their product at risk.

Every lot of honey that enters Sioux Honey Association is tested by one of the leading 3rd party quality assurance companies in the food industry. Competitors may not go to these lengths because of the expense, but Sioux Honey Association feels a responsibility – to consumers, food manufacturers and their own beekeepers – to monitor the integrity of every drop of honey.

Call Burley Foods at (952) 943-1970 to find out about all of Sue Bee’s capabilities, to request samples or schedule a demonstration.